“Black Garden” at The Tank, Review 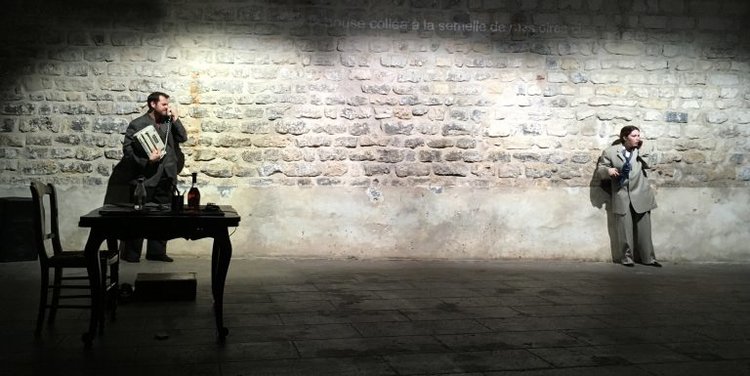 Going in to Black Garden at the Tank you’re likely not sure what to expect. Its promotional material has vague hints at the avant-garde, and references to the Eastern European commentary that will unfold. This leaves the interested party little the wiser as to the content. However, after watching the show you might find yourself feeling sympathy for the show’s PR coordinator. It is, non-pejoratively, a piece that is easier to experience than encapsulate.

In a series of scattered scenes with a somewhat shared continuity, we see ideas and stories unfold. The President of Armenia comically fights with his chief of staff and his counterpart in Azerbaijan. A man and a woman talk to each other in demi-romance through a fog of amnesia. A prisoner is tortured by a soldier. These timelines are punctuated by scenes of brief confessional standup. It all builds to an effect of a montage, almost like a sketch show, but with more melancholy. Tamara Sevunts and Alex Marz play all parts, and throw themselves in with attendant versatility and gusto. Their work makes the show, no question.

It’s a weird piece, to put it bluntly, but to his credit Gordon Penn’s writing never pretends otherwise. Aware of how many of these sights could be received, director Arthur Markarayan and his creative team have thrown in many traditional nods to the untraditional. Jazz drums in between scenes, noir-esque lighting, a deliberately surreal call out of their own production values, many scenes being marked by a weight added or taken away from a scale in the middle of the stage. All these touches frame the show in such a context that the audience knows they’re getting something different. As if the team are saying “we know, but trust us, go with it.” And if you do trust them, and go with it… it does work.

That said, context is going to be many people’s sticking point for the show. Non-traditional black box theatre is often a hard pill to swallow on its own, and Black Garden has the added difficulty of being about different facets of the Armenian experience. For many, not a topic they have devoted much reading time to. The writer acknowledges as much in his production note. This puts a lot of pressure on the audience to be attentive and to read situational cues. Meaning you can’t watch and enjoy the play unless you’re simultaneously studying it. It’s a sixty-minute play, but you have to focus like it’s two hours.

Pedantic qualifiers aside, there’s a lot to like here. The performers are terrific, the writing is quirky and, whilst in a sense lectural, it is peppered with enough wit to keep it consistently interesting. There are a few laugh-out-loud moments, and a couple of penny drops that really stick with you. The overall mise-en-scene of the play has a pleasant lasting aura. You’ll leave thinking harder than expected, and not necessarily any the wiser as to the facts of Armenian history, but you feel the commonality of the human experience exuded from a culture you may not have previously considered. Worth a watch if you’re in the right mood.